​Past and Future ~ the Promise of the ​Rising Sun Inn​ 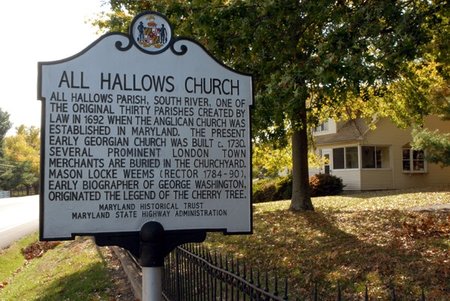 The Rising Sun Inn was built circa 1753 by Edward Baldwin, a prominent Anne Arundel County tobacco grower originally from All Hallows Parish on the South River, served as a farmhouse for Edward, his wife, Susan Meeks Baldwin, and their four children, James, Henry, Lydia, and Deborah.

Edward dies at just 35 years old leaving James and Henry the property with Henry receiving the land and home, now known as the Rising Sun Inn.  Henry served in the Revolutionary War while James maintained the Baldwin property, supplying the Continental Army with tobacco which was shipped from nearby Indian Landing on the Severn River located just a few miles from the property.  ​ 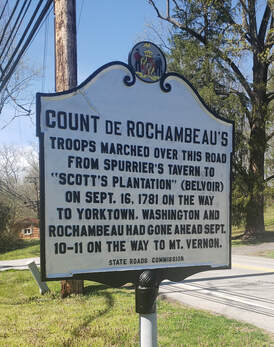 ​
​During the Revolution, the residents would have witnessed the Continental troops marching on the road in front of the Inn. This road is the historic Old Post Road between Baltimore and Annapolis and was a major north-south route used during the Colonial period and appears on some of the earliest Maryland Colonial maps.

The road was also used by General George Washington and the French Major General Comte Jean de Rochambeau during the Revolutionary War, and the roads current name, Generals Highway, is a tribute to these men.  Today, this road is part of the National Washington Rochambeau Revolutionary Route.

General Rochambeau’s troops traveled this route in 1781 to Annapolis where his men sailed to Jamestown to assist in defeating the British at Yorktown.  While George Washington traveled this road many times, his most famous trip was the one made in 1783 to resign as Commander-in- Chief of the Continental Army at the Annapolis Statehouse. 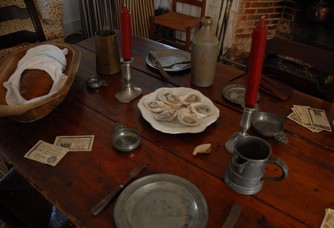 ​After the war, in 1784, Henry married Sarah Hall Rawlings, widow of Anne Arundel County, tavern keeper, Francis Rawlings Jr.. Henry expanded the Rising Sun Inn adding on the gambrel-roofed addition.  In 1785, Henry secured a tavern license. The tavern, known as Baldwin's Tavern and later the Rising Sun Tavern, also served as a post office, stagecoach stop, public meeting place, and tax collector's stop. The Inn functioned as a Tavern until Henry's death in 1794.  Afterwards, Maria Baldwin, Henry's second wife, continued to operate the Tavern, and with the help of her second husband, Augustine Gambrill, the Inn remained a Tavern until 1816.
Following the Baldwin’s ownership, the Inn changes hands several times during the next 100 years.  The Inn was owned by Richard Caton, a wealthy merchant and husband of Mary Carroll, daughter of Declaration of Independence signer, Charles Carroll, until 1836.  The Inn was then purchased by Adam Allen who resided there with his wife, Mary, until his death in 1845. Mary continued to live at the Rising Sun Inn until the mid-1850’s when she was no longer able to maintain the property. Records at time the Inn was sold describe the property as “old and going into rapid decay, and … daily deteriorating in value.”

​The Inn was then purchased by Alexander Randall, a Maryland Attorney General from 1864 to 1867. Randall owned the Inn until 1867 when he sold it to the Inn’s last family, the Williams. Benjamin Williams resided in the Inn with his wife and their children until his death in 1894. Williams' son, Benjamin Randolph, resided in the Inn until his death in 1913.  Some who believe in ghosts say that Randolph never left the Inn, and that he lives there to this very day.

After Benjamin Randolph's death, the Inn remained vacant, used for grain storage and rapidly decaying. ​In 1911, Mrs. Alice Leakin Welsh, along 10 other women living in the Waterbury area of Anne Arundel County, organized the Ann Arundel Chapter of the Daughters of the American Revolution.  Mrs. Welsh dreamed of securing ownership of the old tavern, restoring it, and making it a center for historic and patriotic projects.  By 1916, the now dilapidated old landmark, on the verge of being lost, was rescued from the ravages of time.
​
​Mr. Richard “Bo” Williams, the owner of the Inn, gifted the old Tavern to the Ann Arundel Chapter on November 25, 1916, with the express purpose that it be preserved and maintained as a historical site or museum. Thus began a new journey for the Rising Sun Inn and Tavern, bringing it back to life and back into the community.
​In the century since, the Inn has continued to play an important role in Anne Arundel County. In addition to being maintained as a museum and historical site, the Inn served as a Red Cross Work Center and a Recreation Center for Ft. Meade solders during World Wars I and II, a Tea House during the intervening war years, drawing visitors from all over the world, and has been featured in Anne Arundel County House and Garden Tours right through the 1990’s.

While the Inn still continues to serve as a place for meetings and social gatherings, the dreams of Alice Leakin Welsh, Bo Williams, and so many other have been realized in today's Rising Sun Inn.  The Rising Sun Inn serves the Anne Arundel County community not only as a place for historic education through its programs and activities, but as a place to celebrate the community's past, present, and future.  As the Inn inches closer to its 275th anniversary in the community, the Friends of the Rising Sun Inn look to build on the Inn's already rich history through expanding the museum, developing a full range of youth and adult programming, and inspiring future generations to preserve historic sites and buildings, like the Rising Sun Inn, throughout Maryland and beyond.